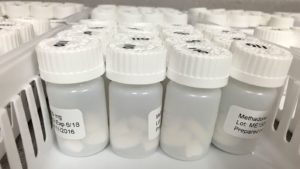 Georgia Senator Jeff Mullis (R) says it’s too easy to open an opioid treatment clinic in his state. In an effort to understand the imbalance in the number of clinics in the Southeast (Georgia has 67 opioid treatment programs, Tennessee has 12, Alabama, 24, Mississippi, just one, for example), Mullis sponsored legislation to place a one-year moratorium on new clinics in Georgia. That legislation has since been signed into law.

Mullis justifies the freeze on new licenses for clinics that medicinally treat individuals addicted to heroin or prescription painkillers (such as oxycodone) by arguing that Georgia needs to discover the whys behind the relatively high number of opioid treatment programs within its borders. “I don’t want to take these facilities away from people who need it,” Mullis says, “but we need to manage, and govern, and regulate the ones that are here, and the ones that are coming here.”

Although there are several licensing requirements in place for anyone who wishes to open a clinic in Georgia—as well as mandated approvals at the state and federal levels of government—the state does not have a certificate of need program for narcotic treatment centers in general, a program that requires operators of certain healthcare facilities to demonstrate a need for them before opening a new facility or expanding an existing one.

Considering that the Centers for Disease Control reports that over 1200 people died in Georgia of an overdose in 2014 (opioids often cited in those deaths), the need is arguably already demonstrated. And considering that that statistic represents a ten-percent increase over the year prior, the situation is even bleaker. Still, opioid treatment clinics remain a polarizing topic.

The clinics themselves often come with a stigma attached. In an effort to safely wean drug-dependent individuals off the substance in question, the treatment substitutes another substance in its place. Methadone and buprenorphine, for instance, are legal, synthetic opioids commonly dispensed in these clinics; some patients will eventually completely wean off those drugs, though it’s typically not mandatory. Some patients will remain on the clinic-dispensed, monitored meds indefinitely. Because those substances block cravings and prevent withdrawal symptoms, they can serve as invaluable aids to individuals on the road to recovery.

However, no matter what the goal or how legally and responsibly it might be achieved, some people see the system as a type of drug shell game that enables addicts to get their fixes.

Jonathan Connell is at the helm of the state provider advocacy group Opioid Treatment Providers of Georgia. He sees a clear difference between dependency and addiction—and between prescribed, monitored medication and illegal substances (or the illicit use of legal ones). “If someone stays on a medication, that’s not really the issue,” he says. “People can still be dependent on something, but not live an active addiction.”

Connell runs three opioid treatment clinics in southwest Georgia. Predictably enough, he disagrees with Mullis’ indictment of the state as devoid of meaningful clinic regulations. Surprisingly, though, he agrees with the one-year moratorium itself (which began June 1). Criticizing the Georgia Department of Community Health (the agency that oversees the clinics) for inadequately enforcing existing regulations, Connell says, “We have had some clinics open up—some people with limited knowledge of the field. They have not received surveys. How do we know they’re functioning correctly?”

A spokesperson for the Department of Community Health says that re-licensure surveys are carried out every two years and further points out that agency guidelines do not stipulate the rate of occurrence for clinic inspections. Furthermore, the agency’s human resources are limited: it operates with a total of three employees (plus one in training), and must oversee all 67 clinics in the state.

From dependency to determination: clinic co-owner disagrees with the state’s halt on new treatment licenses

Zac Talbott runs Counseling Solutions, an opioid treatment clinic in Chatsworth, Georgia that combines counseling with medicine-assisted treatment. But his history with opiate addiction reaches much farther back than February, when his clinic began accepting patients. Eight years ago, while working toward his master’s degree in social work in Tennessee, he was prescribed medication for back pain. He vividly remembers the descent from prescription to addiction: “I still recall to this day, learning how to help people with behavioral conditions in class, and then going to the bathroom to shoot pills and/or heroin.”

When he began the journey to recovery, he discovered that the nearby Tennessee treatment clinics had long wait lists in place. Rather than resign himself to postponement, though, he undertook a four-hour, round-trip commute to a facility in Georgia almost every day for six months to receive treatment. Now in long-term recovery, he expresses gratitude for that Georgia clinic.

Talbott disagrees with the moratorium, arguing that the fact that other states have relatively few clinics means that Georgia can fill an important need. “We’re in the middle of an opioid addiction and overdose epidemic,” he adds. “You just think about that for a minute.”