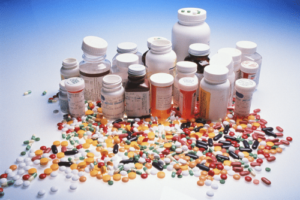 Results of a recently released survey reveal that many people addicted to opioid painkillers in the United States acquire them through social channels. The passing of leftover painkillers from those to whom the drugs have been prescribed to their friends and family members contributes significantly to the epidemic of opioid addiction, an epidemic public health and government officials are struggling to combat.

The study’s authors sent the survey in 2015 to a random sample of 5,000 people. 1,000 of those individuals had used prescription painkillers within the last year. The findings were published in JAMA Internal Medicine, in a research letter called “Medication Sharing, Storage, and Disposal Practices for Opioid Medications Among U.S. Adults.”

According to the findings, 20% of people with a prescription for opioids have shared pills with a friend. Half of respondents didn’t know the proper protocol to dispose of extra medication left over after treatment. The conclusions drawn from the survey corroborate data from the National Survey on Drug Use and Health from 2013, which found that 80% of prescription drug users acquire painkillers from friends.

With death counts on the rise, physicians have to balance dual goals: prescribing enough to adequately manage patients’ pain, but not prescribing so much that patients have leftover drug to distribute to others.

The study’s authors advise that doctors prescribe the smallest number of pills possible to treat pain, a recommendation supported by the opioid management guidelines recently issued by the Centers for Disease Control and Prevention (CDC). Healthcare providers should also teach patients to lock up their pills to prevent stealing and educate them on the slippery slope of opioid addiction.

Making it easier to dispose of leftover drugs is another way to prevent the friend-to-friend spreading of dangerous prescription drugs. The Drug Enforcement Administration (DEA) and local agencies host drug “take-back days” where patients can drop off extra medications; increasing the frequency of these events, and making patients aware of their responsibility to safely dispose of drugs, could prevent many deaths.

With 2 million opioid addicts in the United States in 2014 (according to the CDC) and 44overdose deaths a day (according to HHS), fighting this crisis will require a widespread, concerted education and awareness effort from physicians and government officials. The more information research provides about how people acquire addictive drugs, the easier it will be to stop the epidemic from growing even larger in scale.